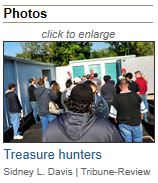 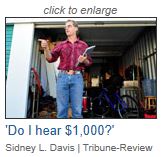 Earlier this month, Bill Miller went to an auction with $35 in his pocket and highlights of the previous week's episode of "Storage Wars" fresh in his mind.

"It can be a hard life, but when things go your way, it ain't too bad," says Miller, who runs a consignment store in Century III Mall in West Mifflin, where he sells his storage-auction wares.

Area storage companies say they are seeing scores more customers at storage auctions than they had just a year ago. They credit the popularity of such reality shows as "Storage Wars," and "Pawn Stars" with turning anyone with big dreams and enough pocket cash to bid on abandoned storage units into amateur treasure seekers.

The shows, which premiered this past December and July 2009 respectively, focus on ordinary people who buy discarded, seemingly valueless items only to discover they've stumbled on something priceless.

A few years ago, Jim Barnett would have been lucky to get four people to come to his storage auctions, even after weeks of posting ads online and in the newspaper. These days, 25 to 30 people turn out regularly.

Larger auctions have been known to draw crowds of nearly 200.

"It has really taken off," says Barnett, who runs Shannon Storage in Castle Shannon.

Some people are just curious, rubbernecking "lookie loos" dying to see what other people have left behind and don't bid. Others buy units and sell the contents to antique stores or retail the items themselves as a side business.

Most episodes of "Storage Wars," "Pawn Stars" and similar reality shows often end with treasure seekers walking away with some valuable heirloom or artwork found tucked beneath piles of junk.

Most times, what's left behind are things too big or heavy to carry. A lot of is just junk -- possessions that either are not worth keeping or too much trouble to throw away.

"In many cases, people take their most valuable stuff with them. They wouldn't leave it in storage," Barnett says.

Getting in the game

Miller attended his first auction in Youngstown, Ohio, in February after weeks of watching the shows. He spent $105 on a unit and came away with a modest haul of tools, clothes, small living-room furnishings and boxes bound by duct tape.

"There was nothing real good in it, but what I got was worth more than I paid," he says.

Last week, he bought the contents of a storage unit in Homestead for $35. Inside was a travel bag, a card table, a plastic tub, and some high-end shoes and purses. Catching his eye amid the mess was an unmarked bank envelope.

"I was so excited that ... on my way to the next auction after that, I forgot to get gas," Miller says with a chuckle. "I wasn't thinking right after that."

State law says a storage company can sell or auction a unit's belongings when the tenant falls at least 30 days behind on their bill, and the business has tried unsuccessfully to collect the rent for another 30 to 45 days.

Shellie and Josh McChesney are regulars who began bargain hunting at storage auctions two years ago, long before the show got hot.

The couple from Stowe got into a bidding war Thursday with Miller for a unit that once belonged to a man who fell several months behind on his storage bill when his home went into foreclosure.

Inside appeared to be an entire houseful of furniture and memories -- there was a sparkling red drum set, several mattresses and bed sets, rug rolls, even a mountain bike.

The McChesney's got to take the contents home after bidding $2,200.